Chances are, many people reading this will have been to the Alhambra Theatre in Bradford. But does anyone remember the Coliseum? Or the Empire? Or the Palace? Next Wednesday’s guest speaker talk is by Tish Lawson and is about the history of the theatres in Bradford.

The History Society organises a guest speaker talk every second Wednesday of the month. Anyone is welcome to attend. The talks are held upstairs in Keighley Library. Doors open at 7pm and the talk starts at 7.30pm and usually last around one hour. Tea and coffee are served. It costs £3 on the door (£1 if you are a History Society member). Please come along.

These are some of the artefacts from the archive that we will be bringing along to our stall at Keighley Show this Saturday (1st September).  Gates open at 9am and the Show runs until 5pm. Car parking is free and Keighley Bus Museum will be running free vintage bus rides to the grounds. Look out for the History Society’s big orange marquee, alongside the Men of Worth Project. To find out  more about Keighley show click HERE.

A wonderful example of a recruitment leaflet produced by Hattersley Sons & Co. Ltd. of Haworth has just been uploaded to our Flickr archive. Click on the image to see more. The item was donated by History Society member Mollie Binns. 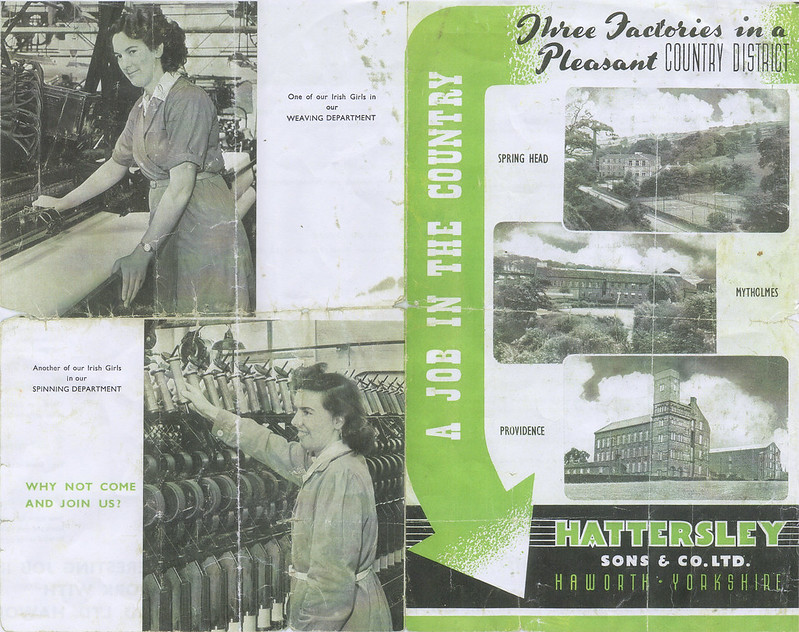 Keighley Library officially re-opened on the 17th August 2007, following a £1.1 million refurbishment carried out between February and August that year. Keighley Library is a Grade 2 listed building and was the first public library in England to be funded by Andrew Carnegie. It includes beautiful murals on the walls painted by Alex F. Smith. The Local Studies Library on the first floor is an amazing resource to be cherished by the town.

This postcard from the History Society’s archive is of Devonshire Park in Keighley. It was posted to France on this day (10th August) 110 years ago.

On Wednesday 8th August, members of the History Society visited the Masonic Hall on Cooke Street. An album of photographs from the visit has been published on our Flickr page. 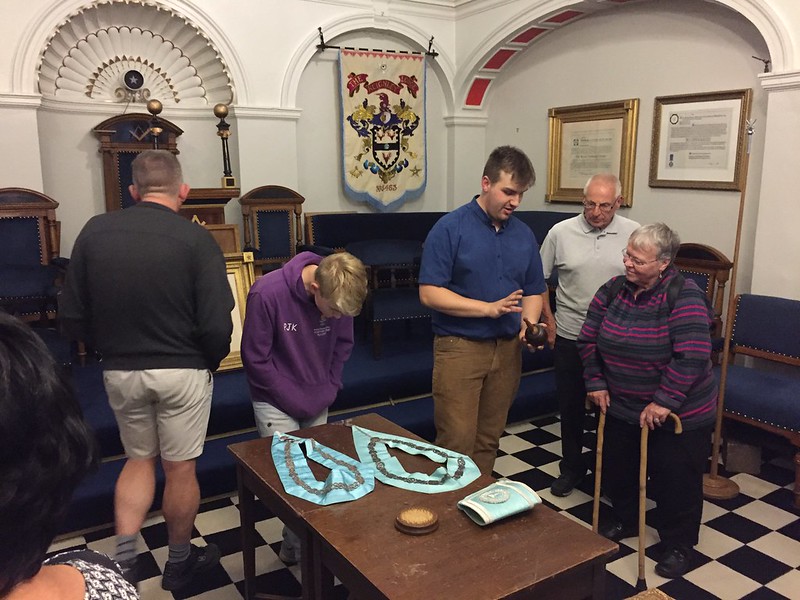 Happy birthday to the Bronte Parsonage and Museum which first opened its doors on the 4th of August 1928. The house was built in the 1770s as a place of residence for the minister at the adjacent St Michael and All Angels church. It was occupied by the Bronte family from 1820 to 1861. The building was gifted to the Bronte Society by Sir James Roberts in 1928 and the Society moved its museum from the upstairs of what is now the tourist information centre at the top of Main Street in Haworth. This is how the event was recorded exactly one week later in the Keighley News. The cutting is from a scrapbook of clippings collected by journalist, photographer and editor George Crowther, many of which are available on the History Society’s Flickr account.

November’s meeting is our Annual General Meeting. There will be reports from the chair and the treasurer, alongside election of the committee members, and the opportunity to contribute to a discussion about the forthcoming year. … END_OF_DOCUMENT_TOKEN_TO_BE_REPLACED
Dec
8
Wed
7:00 pm Christmas Meeting @ Zoom
Christmas Meeting @ Zoom
Dec 8 @ 7:00 pm – 8:45 pm

December’s meeting is our Christmas Meeting. We will be showing an Ian Dewhirst Christmas-flavoured talk from the archive, accompanied by slides of old Keighley (this is the presentation we gave in the library 2 years … END_OF_DOCUMENT_TOKEN_TO_BE_REPLACED
View Calendar
Add